Dominoes has always been a fun game, but this time around we’ve made them alphabet dominoes! We’re using letters instead of dots and cards instead of tiles. There are three sets, so you can try them all out and get in lots of alphabet letter recognition and reinforcement in a fun and playful way. One set matches the upper and lowercase letters in alphabetical order, another set is in scrambled order, and the last set matches the letters to the beginning sound of an object.

Please go to this page to see even more alphabet games. 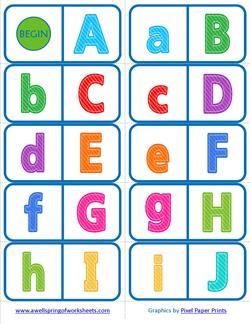 A fun game of alphabet dominoes for beginners. Start at the "begin" domino & match the colorful upper & lowercase letters until you got to the "end" domino. 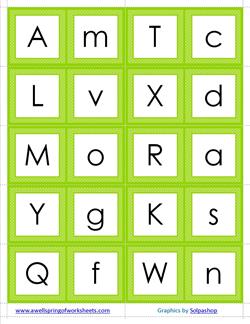 A fun set of green alphabet dominoes, kids match the uppercase letter to the lowercase letter. Match them up just so & you can end where you started!

A brightly colored set of alphabet dominoes, they have upper and lowercase letters and a picture for the beginning sound of another letter in each domino. Looks like some teriffic fun to me!