Please go to this page to choose from even more alphabet worksheets.

Go ahead and take a look at this page for letter a. You'll find lots of different fonts and some fun pictures of things that start with a. 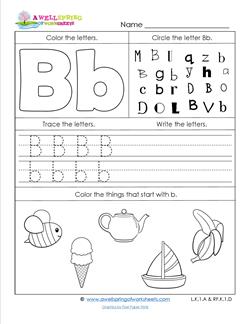 We've got some ABC fun for you with this worksheet for the letter b. Trace the letters and write some more, find the letters, and color the objects that start with b. 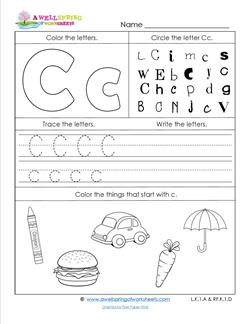 What starts with C? Is it a car, a crayon, a hamburger, an umbrella, or a carrot? It's easy to tell when you look at the words, but van your kids tell by saying the word? 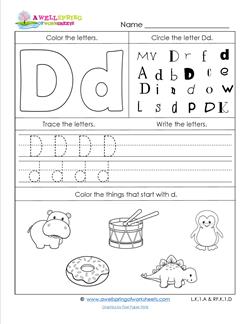 By the time your kids are done with this abc worksheet it will look very different than it did before they started! Lots of circling, tracing and writing and coloring are to be had.

This letter e worksheet is full of fun activities for your kids. Tracing and writing letters, coloring letters and pictures and searching for the letters is all included. 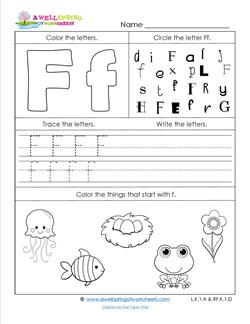 Working together is a great skill to learn. Here's an opportunity for your kids to work together finding the letters and figuring out which objects start with f. 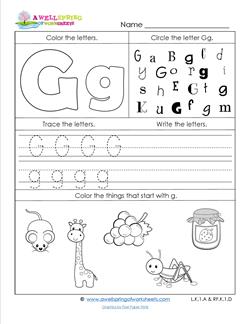 No playing around here. Getting started on this letter g worksheet is of the highest importance. Do not delay. There is too much to do and too much fun to be had. 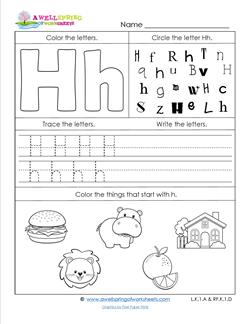 The letter h is here and it's ready at hand. Just print and go. Your kids will enjoy this page with all of its activities and skills - coloring, circling, sounding out words, tracing, and writing. 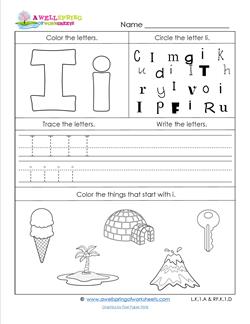 Letter i is here to stay so why not take some time to get a little more acquainted with i and all it's ways. Color the bubble letters, trace the dashed line letters, and more. 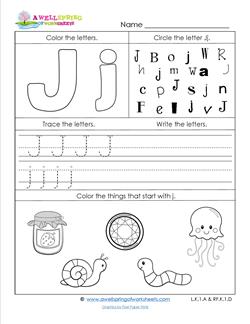 Letter j is a good one. It's not jittery or jealous. It's smooth as jelly without the fruit pieces. That's how smoothly your kids are going to work through this page, too! 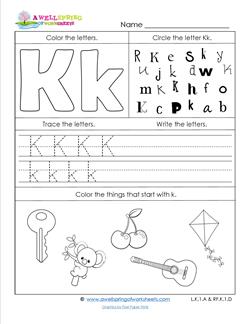 The letter k gets some good exposure in this abc worksheet. It's everywhere. It's big and bold at the top, smaller and hidden among the letters, ready to be traced and written and sounded out. 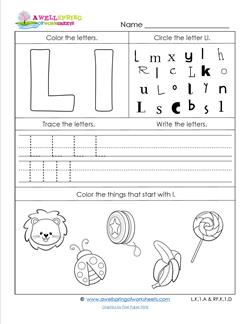 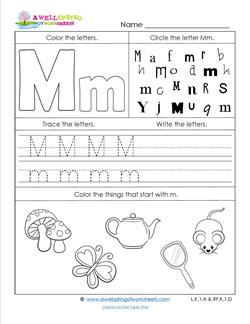 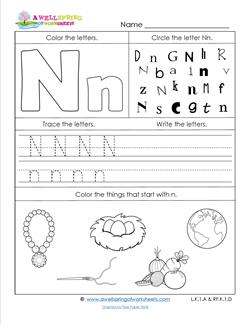 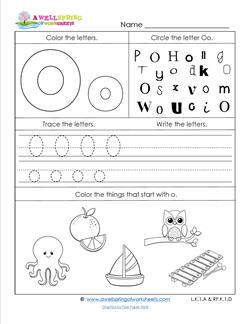 Want a great alphabet page to practice everything O? You've found it right here! Trace & color the letters, circle the Oo in different fonts, & circle objects that start with o. 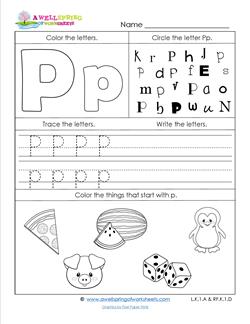 Hop on the bandwagon! It's going to take you to this alphabet page where you can trace and write the letter P, color the Pp, circle each p, and circle objects that start with p. 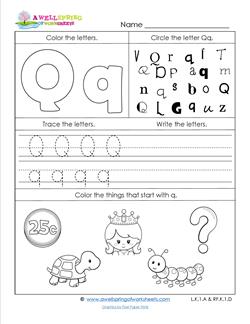 Kids can do all sorts of fun stuff on this alphabet page and learn a ton at the same time. Play find the q's (they're all very different), trace and write q's and color the things that start with the q sound. 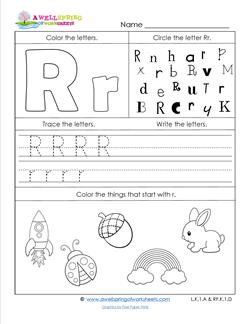 Is this the day for working on letter R? Here's an alphabet worksheet that will be a great help. Kids get to look for r's, color, write upper and lowercase Rs's and more!

Here's an alphabet worksheet that's sure to be a hit with your kids. Color the letters, trace and write the letters, find the letters, and circle the items that start with the letter s. 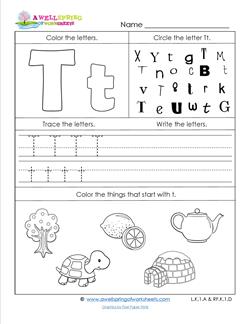 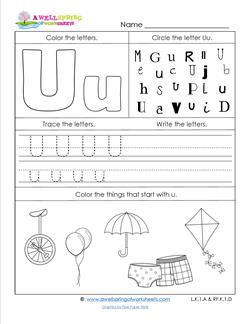 Here's an alphabet worksheets page for practicing everything U! Color & trace the letters, circle the Uu in different fonts, & color things that start with u. 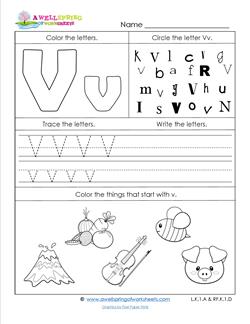 This letter v worksheet is just explosive - like a volcano. It's beautiful - like the sound of a violin. And it's good for you - like vegetables. Go on, give it a try! 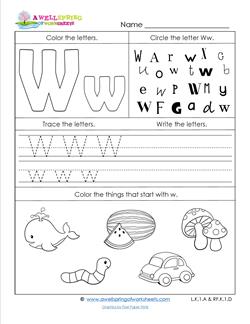 The letter w is just wonderful. It starts wonderful words like whale and watermelon and worm. But don't tell your kids - they need to figure that out on their own! 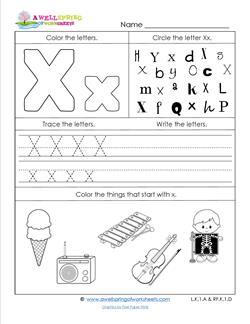 Big X, little x, what begins with Xx? Well, not too much really... But we've still got an assortment of activities to keep your kids busy interacting with the letter x anyway. 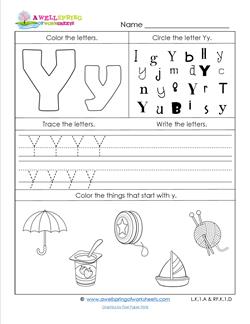 You've come to the right place - there's good times ahead here. Kids can color and write and sound out the names of the objects. They can circle objects and trace letters, too. 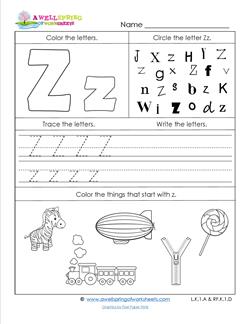 The letter z worksheet is always the end of the line, but it doesn't have to be the end of the alphabet, as far as letter skill building is concerned. Have a turn at this skill-building filled worksheet!