Go to this page to choose from all of the alphabet resources on this site. 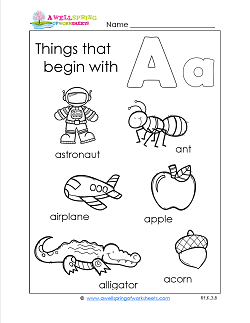 Things that Begin with A-Z

This set of things that begin with a-z worksheets was created with several purposes in mind. The first was to build upon the knowledge of letter identification. Second, these worksheets introduce kids to the concept of identifying words that start with each letter of the alphabet. Third, kids can say the words and practice the beginning sound (they have both long and short vowel sounds). And lastly, they can color the pictures and the letters.

Need a quick worksheet that employs more than one skill? These alphabet letter looks like sounds like worksheets do just that. Each worksheet will take about 10-15 minutes to complete and employs at least four of your kid’s skills: writing, drawing, coloring, and reinforcing their knowledge of the alphabet. Kids trace and write the letters and draw a picture of something that starts with each letter. There’s already a picture of an animal on each page to give the kids an example of the letter sound. 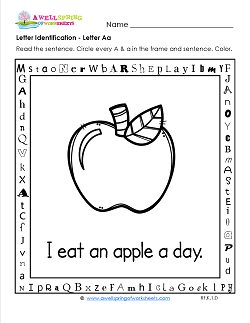 Welcome to a refreshingly new kind of set of letter identification worksheets! Every letter recognition worksheet has a “picture” in a frame created with letters. The picture is of something that starts with the letter for that worksheet and is accompanied by a sentence using words with that letter in it. Each frame has 12 of the letters for that worksheet, 3 on each side. Circle the letters. If you look carefully, you will also find a sight word hidden either across the top or bottom of each frame.