What fun! Kindergarten printing practice pages that will delight you and your kids. These pages include four sets of uppercase and lowercase letters on individual pages as well as one set with the upper and lowercase letters on the same page. All the pages have primary writing lines so your kids can practice their neatest writing possible. Dashed lined letters give kids a chance to trace a few letters, then there’s lots of room for practice.

Go to this page to choose from all the printing worksheets on this site. 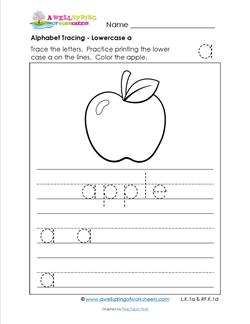 Time to start singing the abc song! As you peruse these alphabet tracing pages you’ll find they’re all here, from a-z, apple to zipper. Each tracing page has a picture and name of an object that begins with that letter. Kids trace the word as neatly as possible, trace the letters, and write a few more letters for practice. I would suggest at least five letters per line. Then they can color the simple pictures to their hearts content! 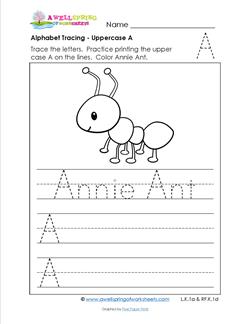 Here’s a great set of alphabet tracing pages for those little ones who are just starting to write uppercase letters on their own. Kids will enjoy the cute, sweet animals on each page. They all have a proper name so kids get practical experience using capital letters. They can practice reading the animal’s names and color them, too. After tracing the words, kids should trace the letters and write some more. I’d suggest five letters per line. 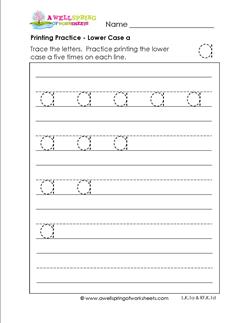 These worksheets are an awesome way to get in some printing practice lower case letters. Hold that pencil just so and go for it! First, trace all the letters on the first line. On the next line trace three letters and write two more. Continue the pattern until you get to the last line. Then, write the letter five times. Each letter should be traced or written at least five times on each line. 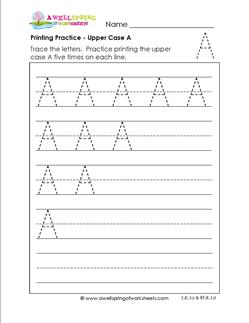 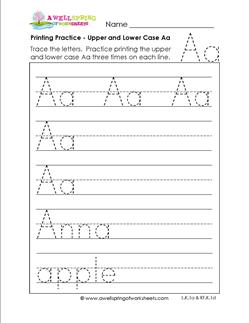 These worksheets are perfect printing practice upper and lower case letters. Trace the letters very neatly. Write each upper and lower case letter two more times just as neatly as they were traced, if possible! Each set of letters should be written a total of three times per line. Trace and write the boy’s or girl’s name and the word neatly on the lines. Work hard and do your best. Giving your best effort always matters!