Have we got some alphabet flash cards for you! As a matter of fact we have six different sets. We have four sets of basic black and white and two sets of color alphabet flashcards. Some have big bold letters, some have letters on primary writing lines, some have pictures and one set has picture words. Hopefully, one (or two or three!) of these sets will be just what you’re looking for. Print on cardstock for longer lasting cards and cut along the light gray dashed lines.

6 sets in color and black & white.

Go to this page for more alpahbet resources. 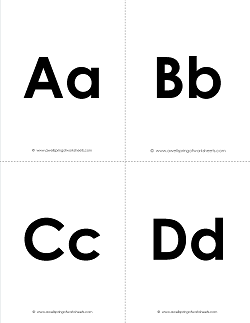 This set of printable alphabet flashcards is plain and simple - clean, crisp, traditional fonts with the uppercase and lowercase letters on the same card. 7 pages with 26 cards. 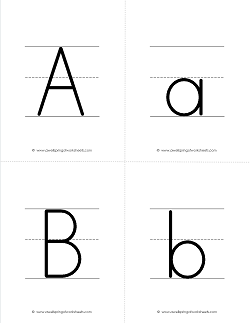 These letter flash cards have upper case and lower case letters on separate cards. The letter are on primary writing lines so kids can see how the letters are to be written. 13 pages with 52 flash cards.